Reality Is The Playground Of The Unimaginative
Home Of Superheroes, Sci-fi, Star Stuff, Scares, Silliness, Smeg, Swords, Sorcery, and the Supernatural 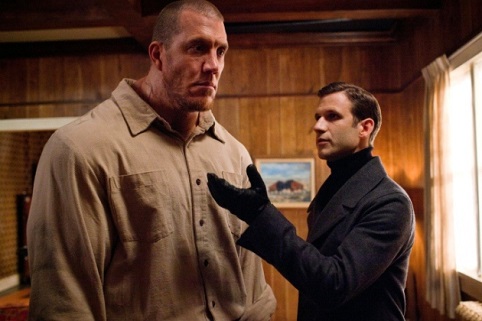 Continuing The Men Of Letters sub-plot from the last episode, Everybody Hates Hitler sees the Winchester brothers moving into the secret society's long-abandoned - and very well-equipped - headquarters and adopting it as their "Batcave".

Sam throws himself into researching the Men Of Letters and their allies and after a couple of weeks comes across a lead on a wartime organisation called The Judah Initiative - as its last member, an elderly rabbi, died of spontaneous combustion at a university in Pennsylvania a fortnight before.

Investigating, they meet up with the rabbi's grandson, Aaron Bass (Adam Rose), who has inherited his grandfather's golem (John DeSantis) - a giant man of clay brought to life by magic to defend the Jews - to help fight a group of Nazi necromancers known as The Thule Society.

On its own merits Everybody Hates Hitler was a superb episode, combining many of the elements that makes Supernatural great - but I have to wonder where this whole Men Of Letters, and now Thule Society, sub-plot is going. It seems a complete tangent from the main season arc of "closing the gates of Hell".

I won't deny the gamer in me felt a certain frisson of geeky excitement when this week's villains were revealed as The Thule Society, as I'd always seen them as major players in the pulptastic Hollow Earth Expeditions roleplaying game.

But the gamer in me also questioned the fact that if The Thule Society had the magic to make the old rabbi spontaneously combust, why didn't they bring out the same big guns - or at least threaten to - when they were facing off against Aaron, the golem and the Winchesters?

So are The Thule Society going to be major players in the Supernatural universe now? Will they turn out to be in league with Crowley? Or will we never hear from them again?

Special mention has to be made of 6' 9" John DeSantis as the golem (see picture above) - one of the most striking presences ever seen in Supernatural and without any special effects. He and Adam Rose make a couple of fine additions to the Winchester's extended family, so I hope they're not forgotten about by the show's writers.

It's These Magical Moments That Make The Odd Blogging Frustration All Worthwhile...