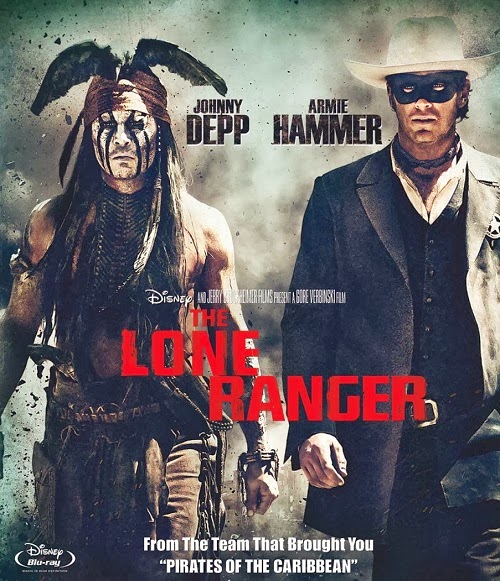 Like John Carter before it, The Lone Ranger was another victim of Disney's marketing team not understanding how to promote a classic pulp character to the general public.

The Lone Ranger also suffered from being saddled with its connections to the successful Pirates Of The Caribbean franchise and Disney's obvious desire to kickstart a similar series of movies - with the attendant lucrative merchandising.

The central performance by Johnny Depp as Tonto isn't really that much of leap from Captain Jack Sparrow. It's as if he only has the one arrow in his quiver these days when it comes to blockbuster action flicks. And did I miss the nerdrage at the racebending casting of Depp as the world's most famous fictional Native American?

But before you start thinking I didn't enjoy this film, I have to say there is a lot to enjoy about it and when the William Tell Overture kicks in for the climactic chase sequence you need a heart of stone not to be transported back to a childhood filled with plastic cowboys and Indians, cap guns and Lone Ranger action figures.

The film's grand finale is truly breathtaking - without a doubt the most incredible extended stunt sequence I've ever seen in a Western.

The problem is the film takes so dang long to get there. In total it's almost two and a half hours in duration and that's simply way too long.

He joins up with Dan - and is deputised as a ranger - to track down dangerous cannibal killer Butch Cavendish (an almost unrecognisable and decidedly evil William Fichtner).

Cavendish's gang ambush the rangers, leaving them for dead, but John is found by Tonto and nursed back to health. He then takes on the guise of the "masked man" to track down Cavendish and his confederates .

This is all well-and-good as a classic origin story, but the waters are further muddied by a very cliché plot involving a nefarious railroad man, Latham Cole (Tom Wilkinson).

Like Pirates Of The Caribbean, the script - by Pirates alumni Ted Elliott and Terry Rossio, and Justin Haythe - blends the action with humour, but this is a bit hit and miss.

There are also suggestions of a mystical angle to some of the goings-on, but - unlike Pirates - the script seems unwilling to commit to whether this is really happening or is a product of Tonto's deranged imagination.

The story also has a framing device of an elderly Tonto recounting the tale of John Reid to a boy in a 1930s' funfair, which primarily serves to give the scriptwriters licence to play with the idea of Tonto being an unreliable narrator, so they can muck around with the linear nature of the story.

This works, but isn't really necessary.

The Lone Ranger could have done with losing about 30 or 40 minutes from its running time, but ultimately the main stretch isn't arduous - just sometimes feels it's going round in circles - and the magnificent grand finale is worth the wait.
Scrawled by Tim Knight at 12:00:00