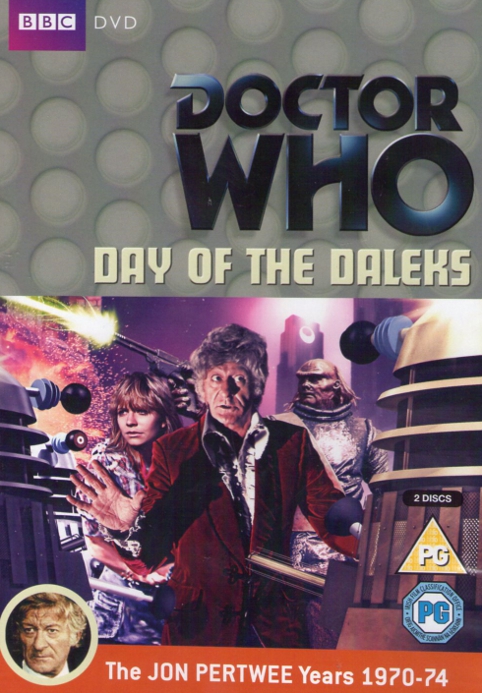 What better way to resume my Doctor Who coverage than with the daleks' first appearance in colour, from the Jon Pertwee era?

Day Of The Daleks sees The Third Doctor and Jo Grant sent to Auderly House to investigate an attack on an important government minister by a "ghost" on the eve of an important peace summit that has been set-up to avert the Third World War.

Although the minister, Sir Reginald Styles (Wilfred Carter) denies the presence of the ghost, when UNIT discovers a primitive time travel device nearby, The Doctor deduces that the assassins will strike again - and he wants to find out where and when they come from.

In a plot that not only foreshadows The Terminator but pretty much lays out a blueprint for Arnie's blockbuster, it turns out the hitmen are actually soldiers from 200 years in the future, where the world has become a grim, factory-planet under the control of the daleks, their human pawns and their ape-like ogron security forces.

The so-called peace conference was pivotal in triggering the wars that ravaged the Earth for a century and laid it open to dalek domination - and so the futuristic freedom fighters are doing their best to prevent it.

Although it takes a very simplistic approach to world politics, Day Of The Daleks is more about exploring the nature of time travel and the fun that can be had with paradoxes - with the one at the heart of this story being a stroke of genius!

There is, however, a scene in the first episode when The Doctor and Jo meet themselves - due to some time travel shenanigans - that is never actually explained or revisted. I guess that counts as an "untelevised adventure" (perhaps it's mentioned in a Doctor Who novel that I'm unaware of).

Being a Pertwee-era Who, this story features The Doctor as 'action hero' with karate blows left, right and centre; The Doctor blasting ogrons with a ray gun (yes, not only does he use a gun - but he kills aliens with it as well!); and an embarrassingly laughable escape attempt on a motorised tricycle that really should have been left on the cutting room floor.

Nevertheless, Day Of The Daleks is a major action piece, with some cracking gun battles between the resistance fighters and the daleks in 22nd Century and UNIT and the dalek forces back in modern (that is 1970s') times.

It could be argued that the daleks themselves are almost superfluous to the story, but I actually see their primarily behind-the-scenes role as an interesting take on their personality. This story really shows how they use other races as slaves and cats paws because of their own, particular, physical shortcomings. They know - although won't admit - their limitations and reserve their direct involvement for key moments when their strengths are needed (such as the full-scale assault in the fourth episode).

Day Of The Daleks is a 96-minute, four-part story and rather oddly - or by design(?) - every cliffhanger for the first three episodes involves the daleks' screeching "exterminate".

Overall, this is brilliant, Boys Own adventure story that makes great use of UNIT, the nature of time travel and the daleks that has something for everyone - from the intellectual ramifications of the temporal paradox that the plot pivots around to the exciting and brutal gun battles in the grounds of Auderly House.
Scrawled by Tim Knight at 09:00:00