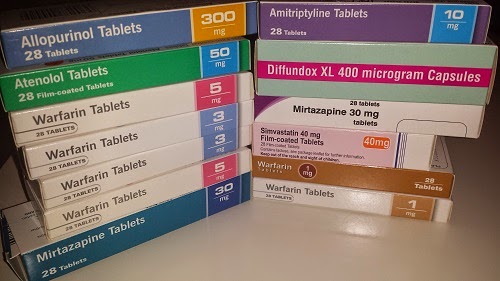 When I picked up Tim's monthly prescription last week, the new pharmacist remarked on the volume of drugs she was collating for him.

She looked horrified, understandably I suppose. Nine years have passed so I'm used to telling the story but I think every now and then, it needs to be told in a little more detail.

On Sunday Tim will be taking part in an all abilities sponsored walk in aid of The Stroke Association.

I'll be there for moral support but it was his idea to sign up. I hope he won't mind me saying that he often finds it hard to be positive, to make decisions alone and to get out of the house, opening himself up to new situations. That's why I am so pleased and proud that he is doing something positive for other people.

At this point I should stress that we are extremely lucky that, all things considered, Tim is very well these days. I'm certainly not looking for sympathy but I would like people to understand that strokes often leave people with issues you can't necessarily see.

For me, it's hard to know which of the problems he has to deal with now are down to the aneurysm and which are a result of the stroke.

The aneurysm burst suddenly and without warning. It was about 10pm on a Sunday night and since then, everything has been different. Eight hours later he was having emergency open heart surgery at King's College Hospital. Afterwards the surgeon who repaired the tear in Tim's aorta told me there was a fifty per cent chance that he wouldn't make it through the operation.

Obviously he did but he'd suffered a stroke -  a lack of blood supply to the brain - during the op. It sounds a strange thing to say but considering everything else that was going on, the stroke seemed minor. Days and weeks passed but he wasn't well enough to be brought out of the medically induced coma. I was told he would never walk or see again - that was when I realised how serious the stroke was.

After three months in hospital he was allowed home. His vision was almost back to normal and he had learned to walk again with a stick. It took many, many months of physio but eventually he built up a little stamina and could lead a relatively 'normal' life, at least compared to the one that had been predicted when he was in hospital.

These days you may look at him and not realise anything is wrong. He can walk into town alone, although I insist that he texts me when leaving and returning home. I'm not totally neurotic - this is actually necessary. He collapsed on one of his short walks and phoned me from the ambulance - thank goodness for mobiles!

As I said, we are extremely fortunate. But every stroke patient is affected in different ways and I would hate for anyone to think that you can see all the problems that a stroke brings. It can totally change someone's personality, as well as their physical ability. It affects their friends and family - there is no longer a 'normal' way of life.

It's certainly not all negative though. Tim is more sensitive now, more loving and considerate. There is no doubt that the stroke changed him but there are plenty of people who have far more to deal with.

So, with a week to go this is a final plea from me to help us hit our fundraising target. We've been overwhelmed by the donations so far but I know how important this charity is and I'd like to raise just a little more.

If you can spare a few pounds, please visit our fundraising page and give what you can.