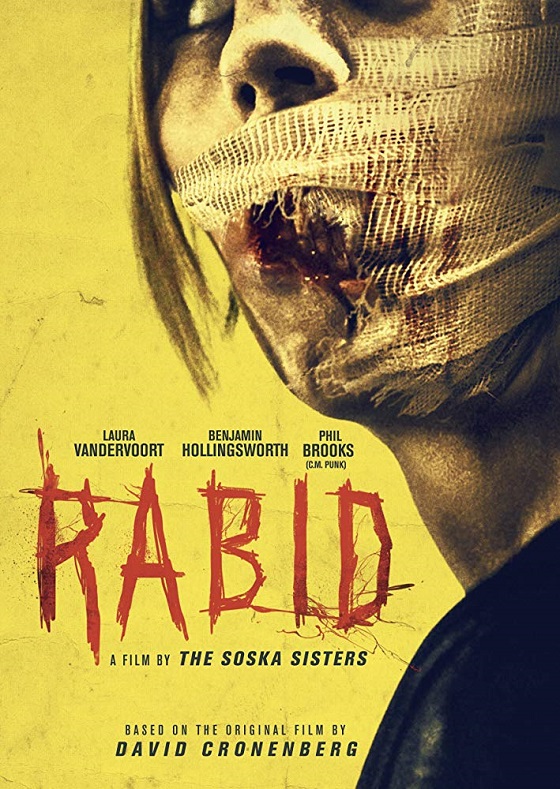 After an argument with her best friend, vegetarian wallflower and aspiring fashion designer Rose (Laura Vandervoort aka Smallville's Supergirl) is hideously disfigured in a road traffic accident.

During her recuperation, she learns of an experimental private medical centre, run by the not-at-all-sinister Dr William (yes, I see what they did there) Burroughs (Ted Atherton).

However, upon returning home, she is troubled by crippling stomach pains and increasingly gruesome nightmares.

Unfortunately, for everyone she comes into contact with, they are not nightmares and she is actually patient zero for an outbreak of superfast, mutated rabies which spreads through the city like wildfire.

A retelling of David Cronenberg's original 1977 body horror classic, Jen and Sylvia Soska‘s Rabid is a phenomenal and shocking tale that takes its audience to some surprising places along its visceral journey.

Featuring everything from Lovecraftian mad science to unstoppable plague zombies, this ticks a lot of boxes for me.

As the mayhem escalates - with the mutated strain of rabies engulfing the city - there's almost an In The Mouth Of Madness level of existential dread, which is then compounded by the film's bleak denouement.

The not-too-subtle critique of body-shaming and vanity is wryly amusing, with several of the supporting roles teetering on the brink of being arch.

Nicely paced and cleverly shot, blurring hallucinations (such as the Silent Hill/ music video sequence) with gruesome reality, the action in Rabid may take some time to get going but the central performances never fail to draw the audience in.

As well as a number of the characters carrying over their names from the original, the Soska Sisters's Rabid is sprinkled with Cronenberg-related Easter Eggs, such as the use of  the name of William Burroughs alluding to Cronenberg's adaptation of his famous novel Naked Lunch and the red surgical gowns worn during Rose's operation are a clear nod to Jeremy Irons's gowns in Dead Ringers.

Rabid was an unexpected delight, as I hadn't originally planned on seeing it as part of the October Horror Movie Challenge.

But when scrolling through the Sky Store (looking for something unrelated), I noticed this film (which I'd remembered being intrigued by when I wrote about it back in July).

The fact that it was on sale at half-price meant I couldn't really say 'no'.

I'm so glad I took the chance.

Rabid turned out, like Braid, to be another surprising discovery thanks to this month's movie challenge, that I might otherwise have waited months, if not years, to see.


It's been a while since I "statted up" a disease, but this movie prompted me to correct that oversight.

I believe you shouldn't take a "one formula fits all diseases" approach, instead treating each as a different monster or series of challenges for player-characters to face.

If a person is bitten or scratched by an animal (bats and dogs are the most common carriers) with rabies they must make a saving roll at Disadvantage to avoid contracting the disease.

Incubation period is then 1d12 weeks, during which time the infected will exhibit signs of increasing irritability, restlessness and depression (from pain, fever, unexplained tingling, pricking, or a burning sensation at the wound site).


Then, if suffering furious rabies, for 4d12 hours after the disease manifests itself, the diseased person will become hysterically violent (losing 1 point of CON every full six hours and 1 point of both INT and WIS every full 12 hours) and uncontrollably dangerous (-1d4+1 SAN), lashing out in a terrifying manner, foaming at the mouth etc.

As well as suffering a -2 penalty to his armour class and ranged attacks during this time (but a +1 bonus to both hit and damage in melee combat), he will develop hydrophobia (fear of water) and (if a WIS check is failed) aerophobia (fear of drafts or of fresh air).

If the infected person is a spellcaster, or reliant on any skills that require concentration, he will be unable to use these abilities for the remaining duration of the disease.

Should they wound anyone (by biting or clawing) during this period, check for further infection (as above).

After that, the victim's violent urges will subside for 2d12 hours, during which time he will endure strenuous convulsions (losing 1 point of CON every hour), which will be extremely intense if exposed to food or water.

At the end of this period the victim will almost certainly be dead from exhaustion.

Should the victim have paralytic rabies, for 4d12 hours, the victim will start to feel his muscles being paralysed - spreading from the initial wound site - and losing 1 point of DEX every hour.

If the victim loses all his DEX before the next stage of the infection, he will be unable to move, but still conscious for the time being.

After that the victim will fall into a coma, unless a CON check is made. This must be rechecked every hour, though, and each hour also costs a further point of DEX.

Once the infected person has fallen into a coma, they lose 1 point of CON every six hours until they die.

Obviously, disease curative magic administered at any stage will halt, and remove, the disease from the sufferer's system.

Recovery is then at the usual rate of one lost stat point per day.

In-Depth Research:
As with my previous disease-related pieces, this is not a scientific article but simply some game mechanics to simulate a virulent disease - thus giving the players something else to worry about besides fighting monsters!

I am not a doctor, nor do I play one on TV or at the games' table.